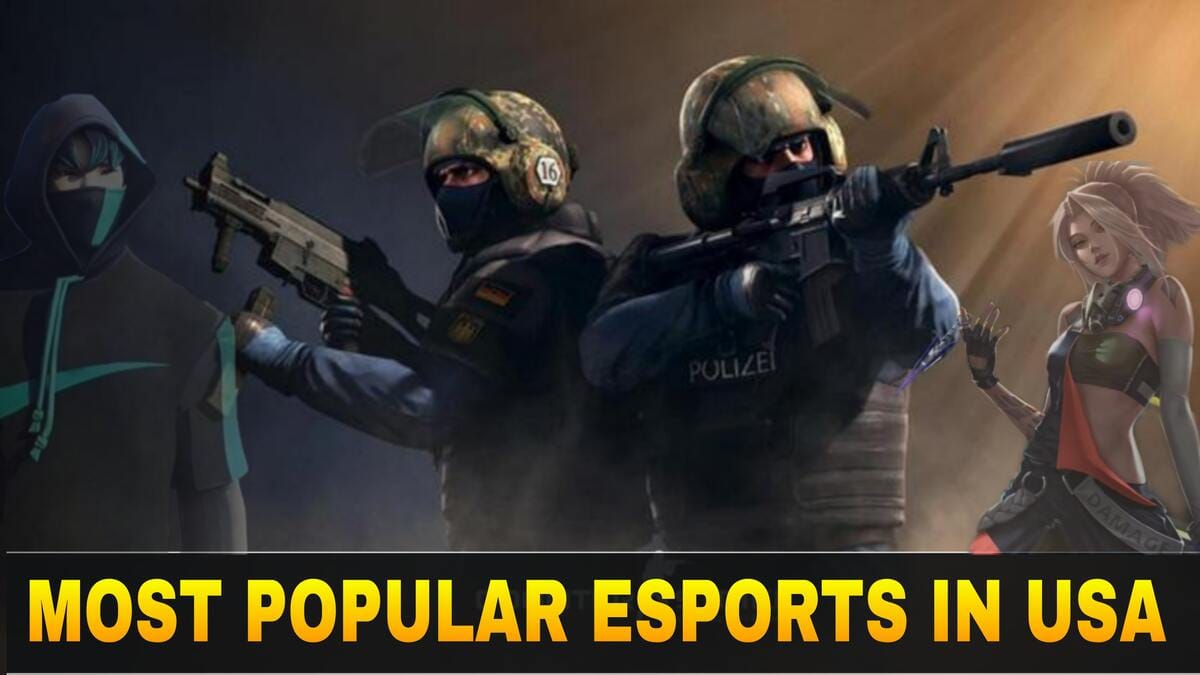 The eSports gaming community is getting bigger, better, and more popular day by day. Nowadays, eSports are more than just a hobby; some professional players are making it a great career option. So in this blog post, we are going to talk about some of the most popular eSports in the USA.

Moreover, esports are generating high revenue and contributing to the country’s economy. According to a report, the esports industry is projected to generate a revenue of above $300 million in 2023. Every year new games are making their place in the gaming community. So let’s have a look at the top prevalent eSports games of current times.

List of the most popular eSports in the USA

Fortnite is a free-to-play action-packed battle royale game with millions of active players, and this thing is enough to prove its popularity. The game is widely known because of its terrific characters, rapid gunfights, incredible skins, etc. Also, Fortnite has some interesting mechanics, and it lets you play with various skills.

Moreover, since the launch of this game, it has constantly gained a lot of popularity. Also, in the beginning, only PC and console users could play this game, but later the game developers made it functional for android users. Most interestingly, Fortnite allows android gamers and console gamers to play together.

Counter-Strike: Global Offensive (CS: GO) is the prevailing online multiplayer first-person shooter game. This game offers you seven different modes to play, such as classic, competitive, hostage rescue, defuse mode, etc. In this game, there are two teams consisting of 5 players fighting against each other. Moreover, you will get rewards in every match based on your sole performance.

CS: GO is a strategic game where you need high skills to win matches. Even experienced players find it challenging while playing the strategic game positions of the various maps. But these are the things in the game that make the game even more exciting and interesting to play.

Defense of the Ancients 2 (DOTA 2) has become very popular in recent times despite facing some hard challenges. It is a mobile online battle arena game in which 5 players compete against the other team having the same number of players.

One of the best things about this game is that you have around 110 heroes available in the game, so you can strategically choose from them. Moreover, in the game, the team that demolishes the opposition’s ancient building first wins the match.

League of Legends, also known as LoL, is among the most popular eSports in the USA and worldwide. In this game also, there are two teams, and each team has five different roles available. The five roles are top laner, mid laner, carry, support, and jungler.

So each team has to choose characters from around 150 available characters for these five roles. The purpose of the game is to destroy the opposing team’s nexus, and the team that does so at first is the winner of the game.

Another name in the list of most popular eSports in the USA is Overwatch 2 (First person shooting game). This game can be considered the updated version of the Overwatch game ( Released in 2016). Here, players should select the best heroes for their team from the available ones so that they can build a great team that fits perfectly for every role.

Moreover, in Overwatch 2, the number of heroes is reduced from six to five. The game has many exciting in-game items, such as cosmetics for heroes, beautiful skins, etc. Also, it has introduced two new game modes that are exciting to play, and the name of these modes are push and player versus environment mode.

So the games mentioned above are some of the most popular eSports games in the USA. However, these games are not specified in any particular order. When we talk about the genre of the game, then the battle royale and multiplayer online battle arena (MOBA) games are very popular.

Also Read: How to get free emotes in Fortnite