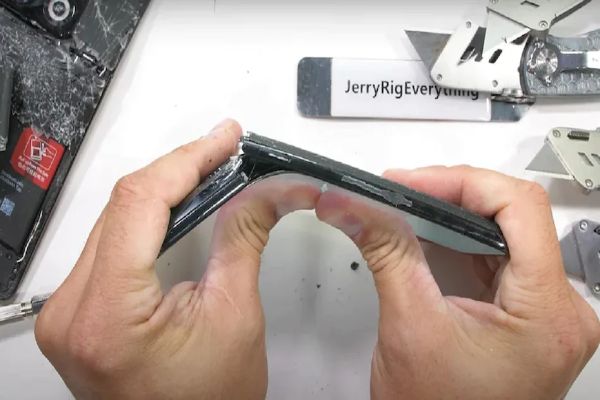 special things
Fluid AMOLED display has been given in OnePlus 10T in 6.7.
OnePlus 10T is equipped with a 4800 mAh battery.
OnePlus 10T has the first camera of 50 MP megapixel with f / 1.8 aperture.
quick link
Features and Specifications of OnePlus 10T
in this article
OnePlus 10T 5G
OnePlus 10T 5G
Earlier this year, the OnePlus 10 Pro went through a dangerous durability test, where it broke in two during a bend test. Now in such a situation, it is likely that the company’s second model of this year will come with improvements in the OnePlus 10T design. You may be disappointed in this though.

Popular tech YouTuber JerryRigeverything has shared a new video in which he tests the durability of the OnePlus 10T model. In the video, he made the smartphone pass through normal durability tests such as scratches, flames and a bend test.

This year’s first flagship for the Chinese smartphone maker failed the bend test and broke in two.

The YouTuber explained that the reason for this is a failure in the structure point below the camera module. Therefore, it can be assumed that the company has made changes in this design to improve its structural integrity.

Although this condition was also with the OnePlus 10T model. The display front and back of the smartphone survived the hardness scale of 6 and the flame testing did not affect the OLED display either.

However, there was a problem during the bend test. Here the 10T model looked similar to the previous 10 Pro. The camera broke from under the module during frame pressure. The video shows that Zach was able to completely disassemble the smartphone with his hands.

He managed to separate the display from the chassis and even removed the cameras from the device. During the durability test, the phone was separated into two parts.

Features and Specifications of OnePlus 10T

On the front, there is a 16MP selfie camera with f/2.4 aperture. For the battery, it is equipped with a 4800 mAh battery with support for 150W fast charging.