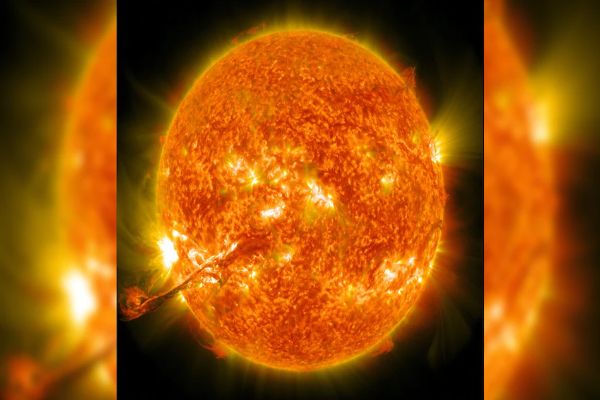 agencies around the world have issued advisory
From Earth’s point of view, this seems a concern, but such behavior of the Sun is normal.
Prem Tripathi Updated on: 18 August 2022 20:18 IST
Share on Facebook Tweet Share Snapchat Reddit Email Your opinion
The storm rising in the sun, may have an impact till the earth, agencies around the world have issued advisory
All this is the result of the 11-year solar cycle that the Sun is passing.

special things
Although it will not affect you at all
Our satellites in space may be affected
power grid may be affected
The danger of several solar storms is looming on the earth one after the other. All this is the result of the 11-year solar cycle that the Sun is passing. It is in very active phase and will be surrounded by movement till the year 2025. Recently, the US space agency NASA had said in a warning that there is a possibility of repeated giant solar eruptions.

Now the British Meteorological Office, the US National Oceanic and Atmospheric Administration (NOAA) Space Weather Prediction Center (SWPC) and the Australian Bureau of Meteorology (BOM) have issued advisories for solar and geomagnetic storms over the next few days. The reason for this is a sunspot formed on the Sun, which is repeatedly provoking solar flares and coronal mass ejections.

According to media reports, this seems to be a concern from the Earth’s perspective, but such behavior of the Sun is normal. These storms can cause some minor disturbances. However, they will not affect you at all.

Only our satellites in space can be affected. The power grid may be affected. If storms become more dangerous, they can put the passengers in space at risk. If you live in a high altitude, then you can get spectacular aurora views.

Solar storms are a natural part of the life of the Sun. Every 11 years when a new cycle begins, it goes through different activity levels. During this, the movements in the sun increase. Because of this, coronal mass ejections ie CME and solar flares are seen.

CMEs are large clouds of solar plasma. After a solar explosion, these clouds spread into the Sun’s magnetic field in space.

Due to their rotation in space, they expand and often they reach a distance of several lakh miles. Sometimes they collide with the magnetic field of the planets. When their direction is towards the Earth, they can cause geomagnetic disturbances.

Because of these, short circuits can occur in satellites and power grids can be affected. If their effect is high, they can also put the astronauts in Earth’s orbit at risk.