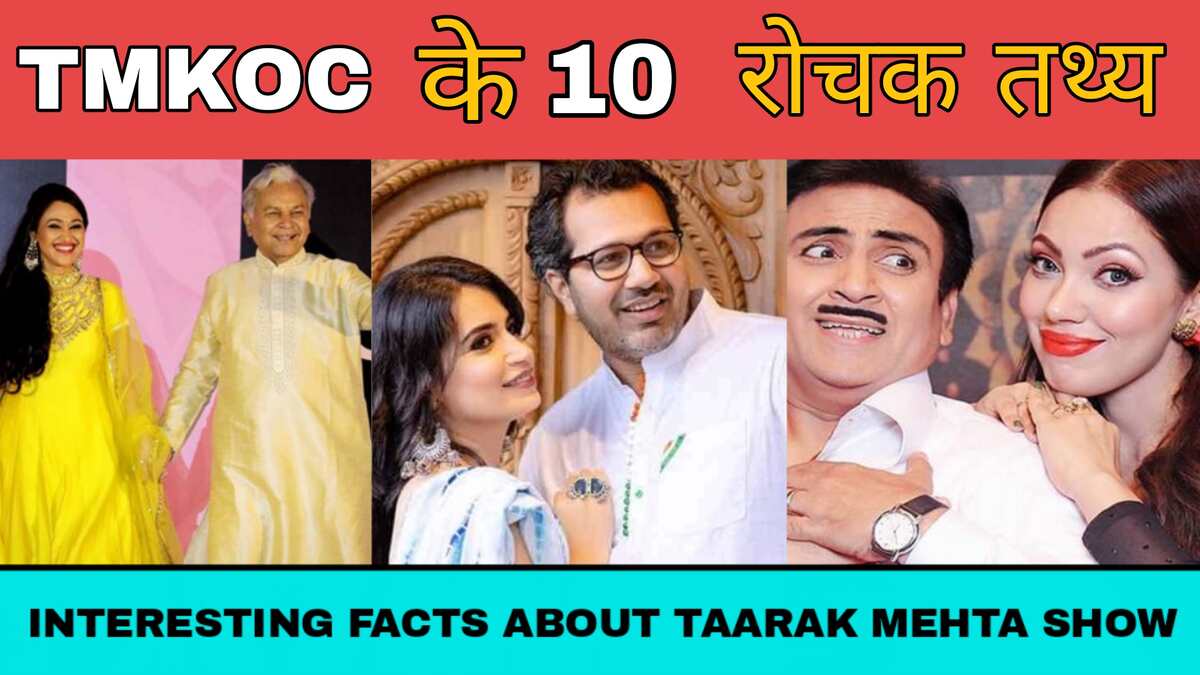 Taarak Mehta Ka Ooltah Chashmah (in shortly TMKOC) is an Indian show with lots of comedy. It has been one of the favorite shows of people in India for a long time. On July 28, 2008, its first episode was telecasted, and till now, around 3566 episodes have been telecasted.

But there are many interesting facts about Taarak Mehta show that you might not know. Most of the things that we see in the show are not the same as in real life. So we will tell you such amazing facts about TMKOC.

List of some interesting facts about Taarak Mehta Show

1. Tapu and Gogi are cousins

Former TMKOC member Bhavya Gandhi aka Tapu, and current member Samay Shah aka Gogi, are cousin brothers in real life. However, they are both seen as good friends and neighbors in reel life.

Tanmay Anand Vekaria, aka Bagha, was brought to the show to take care of Jethalal’s shop in the absence of Nattu Kaka. But later, he got this role permanently on the audience’s demand.

4. Jethalal and Babita Ji worked together before TMKOC

In some episodes, the father of Disha Vakani has played the role of the cousin of Champaklal. Moreover, he also made his appearances in some other minor roles.

6. Patrakar Popatlal is a married person

The most eligible bachelor of the show, patrakar Popatlal Pandey ( Real name – Shyam Pathak), is not a bachelor in real life. In reality, he is married to Mrs. Reshami and has three children.

Sunderlal, aka Mayur Vakani, and Daya ben, aka Disha Vakani, are real siblings in reality too, as shown in the reel life. In fact, Daya ben is older than Sunderlal in real life too.

8. Bapuji is younger than Jethalal

In the show, Bapuji, aka Amit Bhatt, is the father of one of the lead actors Jethalal aka Dilip Joshi. But when it comes to real life, Bapuji is almost 4 years younger than Jethalal.

9. Rita Reporter’s real husband is the director of the show

Rita Reporter, aka Priya Ahuja, is the wife of the show’s director Malav Suresh Ahuja. She is a news reporter for the Kal Tak channel in the show.

10. Aatmaram Bhide is an engineer in real life

Aatmaram Tukaram Bhide, the secretary of the Gokuldham society, aka Mandar Chandwadkar, is a mechanical engineer in reality. He has even worked in Dubai for around 3 years.

11. Once, Bhide and Madhavi also worked together in a show named Parivartan

Bhide and Madhavi are among the most beautiful and sensible couples in the TMKOC show. But you might not know that they even worked together in a show called Parivartan before the TMKOC show. The best part is that they are also a Marathi couple in that show.

The show has been running for the last 14 years, and many of us have grown up watching it. But only a few might know the above-mentioned interesting facts about Taarak Mehta Show. So do you know about these amazing facts? Let us know in the comment section.

Also Read: Why these 7 Actors Left the Taarak Mehta Show?